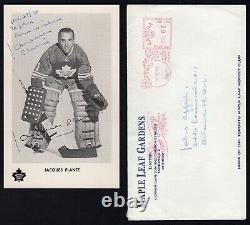 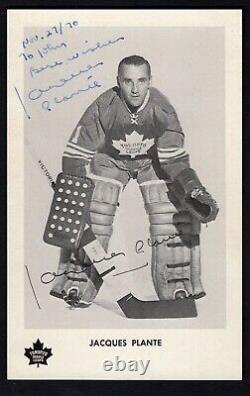 JACQUES PLANTE SIGNED 1970's TORONTO MAPLE LEAFS POST CARD WITH ORIGINAL MAILER NHL HOF AUTOGRAPH. Nice clean autograph of this hall of fame legend. Plantes autographs are particularly tough to source as he passed away in 1986. The postcard is personalized to John and this comes in the original envelope from Maple Leaf Gardens and the original owners address is also hand signed by Plante as per the way he signs the letter J. The postcard is creased on the left side but this could be matted and framed for an amazing display piece. The pictures provided in the scan below are an accurate reflection of the overall grade.

The seller is "qcards" and is located in Nepean, Ontario. This item can be shipped worldwide.